Now more than ever, we need action to prevent the growing trend in obesity and inactivity. Consider this as we encourage you and your peers to sign up for the UK’s National Obesity Forum’s JanUary campaign. 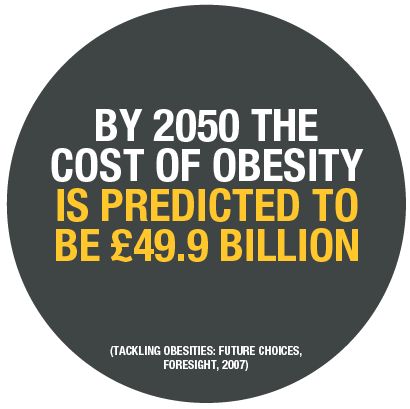 Solutions put forward over ten years ago, are still being called for in new reports. How many reports have to be submitted and how many groups of experts have to gather to discuss obesity and inactivity before recommendations become policy?

“One third of children leaving primary school are overweight or obese, and the most deprived children are twice as likely to be obese than the least deprived. This has serious consequences for both their current and future health and wellbeing and we cannot continue to fail these children. There are many causes and no one single or simplistic approach will provide the answer. We therefore urge the Prime Minister to make a positive and lasting difference to children’s health and life chances through bold and wide ranging measures within his childhood obesity strategy.”

Powerful, emotive and encouraging words from Dr Sarah Wollaston, Chair of the Select Health Committee which published its report on child obesity on 30th November; read it HERE (1).

On the same day, the Faculty of Sport and Exercise Medicine (FSEM) announced that in coalition with a “ground-breaking group…of organisations from different but related fields, including medical, nursing, charity, and public health” it launched a new Obesity Stakeholder Group and produced a joint position to combat the epidemic of obesity.

As a Lay Adviser, to FSEM with special interest in obesity issues, and as a Jamie Oliver Food Revolution Ambassador, it is exciting to see this alliance of agencies work together. The joint position contains ten urgent interventions to hopefully influence the Childhood Obesity Strategy – expected to be published this month – and impact positively on our obesogenic environment. Read the position in detail HERE (2).

I say hopefully, because while the structure of the group is groundbreaking, the ideas are not. Obesity is not a new problem and these two reports are not the first attempts to influence UK Government policy on obesity issues.

Almost all of the recommended interventions called for in these reports were also considered to be urgently required twelve years ago, in a House of Commons Health Committee Obesity Report, which you can read HERE (3)

For instance, the first recommended intervention from the Obesity Stakeholder Group demands that:

“The Government should introduce a ban on advertisements before the 9pm watershed for food and drink products that are high in saturated fat, salt and sugar. Alongside this, regulation governing on-demand services and online advertisements should be tightened to align with broadcast regulations,”

Back in 2003, it was already accepted that advertising for less healthy foods was an issue:

“The Hastings Review offered stark evidence of the extent to which advertisers of less healthy foods were saturating broadcasting slots targeting children, who are often watching without any adult present. While we would not want to go so far as to call for an outright ban of all advertising of unhealthy food, given the clear evidence we have uncovered of the cynical exploitation of pester power we would very much welcome it if the industry as a whole acted in advance of any possible statutory control, and voluntarily withdrew such advertising”

The next intervention highlights the need to combat the pricing and promotion strategies of food retailers:

“Retailers should be set targets to improve in-store architecture to reduce the display of unhealthy foods in areas such as checkouts and end of aisle displays and increase price promotions of healthier alternative products.

In 2003, it was again recognised that the pricing and promotion of unhealthy food contributed to our obesity epidemic:

“As part of their healthy pricing strategies, supermarkets must commit themselves to phasing out price promotions that favour unhealthy foods, and also stop all forms of product placement which give undue emphasis to unhealthy foods, in particular the placement of confectionery and snacks at supermarket checkouts.”

The alliance also demands that:

“The Government should develop an independent set of incremental reformulation targets for industry, backed by regulation and which are measured and time bound. These targets should address salt, sugar and saturated fat levels. Compliance with these targets should be monitored and non-compliance should be backed by meaningful sanctions.”

“We recommend that, rather than targeting sugar and fat separately, the Government should focus on reducing the overall energy density of foods, and should work with the Food Standards Agency to develop stringent targets for reformulation of foods to reduce energy density within a short time frame. While we expect that reformulation could be achieved through voluntary arrangements with industry, and while we believe that the introduction of legislation in respect of labelling will encourage industry to make the entire product range healthier, the Government must be prepared, in the last resort, to underpin this with tougher measures in the near future if voluntary measures fail.”

In 2013, we were “appalled to learn of the desperate inadequacy of treatment and support services for obese children.”

Fast forward to 2015 and we are still concerned about the provision of weight management services:

“The Government should commit to sustained investment to extend and increase the provision and quality of weight management services for families across the UK.”

I could cite more examples of the present repeating the past. And whilst both reports repeat very valid and necessary changes, there are questions about the lack of action at a policy level that should and need to be answered.

Why, twelve years later, are we still having to ask for these same interventions? How can we hope that today’s experts will be able to secure much needed policy changes.

How do we ensure that, this time, these interventions are implemented?

It is evident that we cannot rely solely on voluntary action by food manufacturers and retailers and that statutory regulation is now unfortunately necessary. The Responsibility Deal has had little effect and has confirmed that businesses are responsible only to their share-holders. Only through direct interventions, from Government or consumers, will they alter their practices.

A recent BMJ paper by Professor Theresa M Marteau highlighted the impact of product and portion sizes on consumer spending and consumption. It included the fact that ‘most national and international policies to prevent obesity highlight a need to reduce portion sizes’ (4). From this, and many other medical based papers, it is difficult to foresee a seismic shift in consumer behaviour without the Government initiating action. However, is there a climate for change within this Government and will they listen and act, or will the pressure placed upon them by other influencing groups prevail?

How many reports have to be submitted and how many groups of experts have to gather to discuss obesity and inactivity before their recommendations become policy?

The costs of obesity and inactivity are too high for these recommendations to be ignored again.

The formation of the Obesity Stakeholder Group is a significant step forward in the fight against obesity and it is to be commended for its bold report, but now, more than ever, we need action, not just words.

Stephen Morrison is Lay Adviser to the FSEM UK and works for the Department for Work and Pensions. He is an everyday Physical Activity Champion for HASSRA Scotland, a Fitness Day UK Ambassador, and Jamie Oliver Food Revolution Ambassador. Having turned his life and health around with exercise, Stephen’s agenda is to raise awareness of health inequalities and push for a more holistic approach to inactivity within community wide programmes. Stephen also champions the management of obesity with physical activity, the issues surrounding this in the public domain and a call for “a different approach”. Stephen is also a columnist for Man v Fat and charts his journey as a try athlete at http://howmanymiles.co.uk/