Cutting edge research was presented at many IOC World Conference Prevention of Injury and Illness in Sport 2014 Monaco sessions. Among these, was a focus on cardiology, and specifically, preventing sudden cardiac death (SCD). Speakers discussed the importance of screening, interpretation of athletes’ electrocardiographs (ECGs), the roles of ethnicity, gender and age, and how to prepare for a sudden cardiac arrest (SCA).

Dr Matthew Wilson explained that SCD is rare, with an incidence of about 1 in 50,000. The mean age of death is 23 years; it is more common in males (9:1), with 90% of events occurring during or immediately after exercise (Bille et al, 2006). The most common cause is hypertrophic cardiomyopathy (HCM), accounting for about 36% of SCD (Maron et al, 2003). HCM is frequently genetic, and the prevalence is about 1 in 500, although it can be as high at 1 in 100 for black athletes. 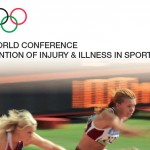 Peak organisations including the American Heart Association, the European Society of Cardiology and the International Olympic Committee recommend pre-participation screening including a 12-lead ECG. However, there remains some debate about screening, regarding which elements to include (history, physical, ECG) and the sensitivity, specificity and cost-effectiveness of a program. The value of screening may be proportional to the background risk of SCD in the population (according to Bayes theorem). For example, on the basis of risk stratification, black male basketball players are a good population to screen because their background risk of SCD is higher.

While the ‘history’ element of screening is frequently used, it has generally poor sensitivity and specificity, and the particular questions asked have not been well-studied. For the physical exam, Professor Mats Börjesson emphasised the importance of looking for Marfan’s syndrome, any heart murmur, the femoral pulses and brachial artery blood pressure. However, the physical exam alone has very low sensitivity. Adding a 12-lead ECG dramatically improves sensitivity and specificity, particularly when interpreted according to the new Seattle criteria.

In terms of the specificity of interpreting athletes’ ECGs, Dr Wilson emphasised that the most difficult thing for physicians is to recognise what is normal. To help sports physicians understand features of athletes’ ECGs, there is a free online unit available through BMJ Learning.

Dr Wilson and Professor Jonathan Drezner explained the key point that a normal athlete’s heart is different from the heart of a sedentary individual due to the athlete’s electrical adaptation for greater cardiac output. The way the heart adapts depends on age, ethnicity and gender. Therefore, interpretation of an athlete’s ECG requires an understanding of these changes and is quite specialised. In this context, an athlete is defined as someone aged 14-35 who has done more than 6 hours per week of organised, intensive physical activity in the year prior to the ECG.

The important role of an athlete’s ethnicity in interpreting their ECG was emphasised by the presenters. While it may be a contentious issue, evidence suggests that there are very big differences between Caucasian and black (African) athletes’ ECGs. What is normal for a black (asymptomatic) athlete may be very concerning in a Caucasian athlete (e.g. anterior T-wave inversions in leads V1-V4, preceded by a convex ST-segment elevation) (Papadakis et al, 2012). Therefore, it is ideal for the person interpreting the ECG to have information about an athlete’s ancestry (including grandparents).

In terms of the anxiety associated with screening, Dr Irfan Asif’s study found that the reason for the false positive (history, physical or EGC) was irrelevant to the level of anxiety. Rather, the level of distress was related to the time taken for the follow-up test.  Once a diagnosis of an underlying pathology is made, it is important to ensure the athlete has mental support at an early stage, as well as having their physical condition treated.

Professor Drezner also gave a very useful presentation highlighting the importance of preparing for the possibility of an SCA. The single greatest factor affecting survival is the time from cardiac arrest to defibrillation. Sporting clubs should have a written emergency access plan, including the location of defibrillators (must be accessible within 3 minutes, batteries working) and who to call, and must practise using it.

In the event of an SCA event, the key steps are: