LETTER TO THE EDITOR

The recent BJSM article  “Is the lack of physical activity strategy for children complicit mass child neglect?”  is well-informed and highlights a major problem, but, like many professional commentaries it seems to be “politically correct” in not mentioning the real Elephant in the Room. 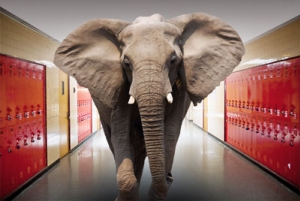 The fact that one in three older primary school children are overweight is obviously a major concern for the future of those children and for the nation as a whole.

However, time after time when this issue is raised in the public consciousness (as in this case with a mention and discussion on Radio 4) it is always the popular media, the technical journals, qualified professionals or, occasionally a politician, who highlights the problem.

What about the parents? Surely it should be parents raising this issue and, where it is within their power, putting all their efforts into solving the problem, for the sake of their children?

Yes, school playing fields have been sold off  (and how many parents really used their “political clout” to stop the sales?) but there are still ample other ways in which children can get exercise; however this usually involves the expenditure of time, effort and thought by their parents.

Similarly, there is ample information available on healthy eating and, more importantly, the adverse effects of a lifetime of poor diet (we haven’t mentioned Alzheimer’s yet!).

We seem to unquestioningly accept parents saying that “I don’t understand about diet, it’s all too complicated” when these same parents know precisely how to download a new ring tone for their iPhone, how to “Skype” Auntie Flo in Australia,  or the latest winner of  “Strictly…..”.

We are told that parent’s sole concern is the well-being of their children, but we see all around us, walking the streets, the proof that in many cases, this is not so. (Obese girl who weighs 10 stone at age of 5 is taken into care!! – Daily Express, 9/12/13).

Some typical horror stories among my friends, neighbours and relatives include:

A huge number of parents appear uninterested in their children’s current mental or physical well-being, and their future quality of life. The Government, Schools and Councils can only do so much in the face of parents who do not prioritize physical activity and health.

To refer back to the BJSM article title “Is the lack of physical activity strategy for children complicit mass child neglect?”, I have believed for many years that a huge number of parents (not all, by any means) were guilty of child neglect, but society and government seemed to always look the other way.

Until society accepts this reality and also starts publicising and dealing with a base factor in the childhood obesity epidemic, which is parents, our children will continue to suffer in both the short and long term.

To ensure greater and sustainable economic, mental and physical health of nations, every individual has the responsibility to push for a culture change in health and physical activity, not just on a political level, but even more importantly, on a familial level.

Roger Redman is a retired Aerospace Research Engineering Manager with an interest in the welfare of children for the sake of their, and the UK’s future.

Ideas to add to this conversation?  Thought or opinion about another BJSM article? Email: karim.khan@familymed.ubc.ca